K-State Professor Teaches Science and How to Explain it 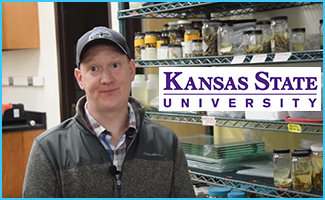 Effective communication can be the most fantastic conductor for change, for both cells and scientists. Dr. Michi Tobler, Associate Professor of Biology at Kansas State University champions the cause of the Science Communication (SciComm) initiative at K-State and within the scientific community. He observes the impact it has on his research and his students.

Dr. Tobler researches the adaptability of fish species to toxic environments and conditions. Hydrogen sulfide is highly toxic even in small amounts and when exposed, most cells suffer a shutdown of the mitochondria and lose the ability to produce energy. Not only have these fish survived, but their cells have developed the ability to circumnavigate the toxic effects and keep their mitochondria working as they manage to detoxify the hydrogen sulfide. His research has found that these adaptations have occurred multiple times in different species of fish living in similarly toxic environments. “What our research shows is that evolution has found very similar solutions over and over again by modifying the same physiological pathways to deal with the toxic environment,” Tobler said.

One of Dr. Tobler’s passions at Kansas State University is to connect scientists to members of the community to explain their research. Translating their work to layman’s terms can be difficult for scientists but is paramount to continuing their study. “I feel it’s part of our responsibility as scientists to make sure that our research is accessible and translatable to others,” Tobler said. Researchers don’t always know the application or the solution they are working towards, but they know that no answers will ever be discovered without the opportunity to keep exploring. K-State hosts and organizes several events throughout the year on behalf of the Kansas Science Communication Initiative, including Science Communication Week, and most recently, the Science Communication Conference. The SciComm initiative helps the entire research community explain the relevance of their work to public and policy influencers.

One potential influence of Tobler’s research is that hydrogen sulfide is produced within the human body and plays an important role in cellular communication and modulating some healthy physiological processes. The pathways that Tobler’s lab is researching in fish are also present in humans and almost identical across all animal life. “We can use these fish as a model to understand how toxins work within a cell and within a body that we couldn’t do in other organisms,” Tobler said. These fish provide a natural model to understand how other organisms deal with toxins in a way that would be otherwise impossible to test.

Tobler’s research has taken him to Mexico, Costa Rica, Dominican Republic, and Florida. Originally from Switzerland, he loves to travel and experience the world. He recalls growing up in Eastern Switzerland catching tadpoles and watching with amazement as they turned into frogs. “That interest in nature was always present,” Tobler said. “I just didn’t realize until much later in my life that there were careers I could pursue in this field.” He met his wife during graduate school at the University of Oklahoma. She is a biologist, so they have both passed down naturalist genes to their two daughters. Their oldest is a Harry Potter scholar and the youngest has rock and bug collections, including a pet cockroach. Dr. Tobler’s research and his students are taking on the challenge of discovering how cells communicate their modifications to handle extreme adversity. But his work doesn’t stop there. He strongly emphasizes to his students and other scientists the importance of their communication skills when conveying the potential impact of their work. Ultimately, the success of future discoveries depends on it.