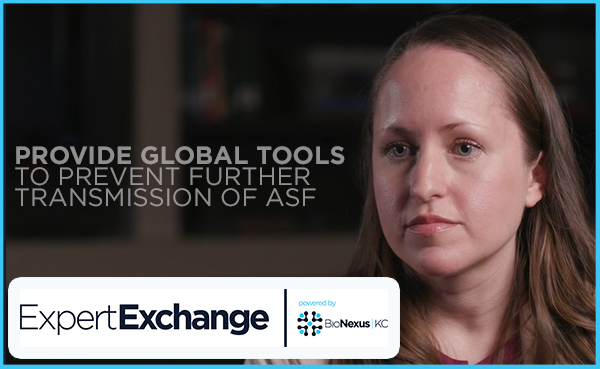 There is a delicate balance being maintained by the global food production industry. Dr. Megan Niederwerder, Assistant Professor at Kansas State University (K-State) in the Diagnostic Medicine Pathobiology Department, focuses her research on best practices to combat the spread of African swine fever virus (ASFV), a disease that affects other countries but is not currently in the United States.

Niederwerder can specialize in this emerging threat of ASFV because of K-State’s Biosecurity Research Institute, a biosafety level 3 facility which allows her to work directly with the virus on the species affected. “This research is significant due to the current threat of ASFV emergence throughout the world and the future research on ASFV as a high priority pathogen at the National Bio and Agro-Defense Facility (NBAF) currently under construction near K-State,” Niederwerder said. “ASFV is a very complex and unique pathogen for which there is no surrogate virus for research.”

Niederwerder’s research strives to identify how ASFV is introduced into new countries and investigate ways to mitigate that risk. Using research and analysis from the 2013 porcine epidemic diarrhea virus (PEDV), the last major transboundary animal disease introduced to the U.S. swine population, it was determined that feed and feed ingredients may have facilitated a route for virus introduction and subsequent transmission throughout the country. “Based on that evidence, our research is expanding the knowledge between feed risk and ASFV, to understand if feed or feed ingredients support virus survival, whether pigs can become infected through the natural consumption of contaminated feed, and what mitigation strategies we can put in place in the U.S. and other countries to prevent introduction and transmission,” Niederwerder said.

ASFV recently made headlines because it has infected pigs throughout China and other Asian countries, causing the elimination of nearly a quarter of the world’s pig population. Since the first report of the virus in China in August 2018, it has now spread to most of the pork producing provinces in the country. “This is significant because the virus is environmentally stable and can be extremely difficult to eradicate once it is introduced,” Niederwerder said. The mortality rate for infected pigs is nearly 100% with the current strain and there is no efficacious vaccine or treatment. The impact of this loss is not only significant to animal health and animal welfare but also to the economics of pork-producing countries throughout the world. “ASFV is important to the U.S. swine industry, and to all major pork producing countries, because it is what we call a trade-limiting disease, meaning significant trade restrictions are imposed on exports once the virus is introduced into the country,” Niederwerder said.

Niederwerder expresses a life-long interest in science and says she was inspired to do this type of work by the wide-reaching impact it could have on the global population’s food supply and the welfare of the animals. She was drawn to this research due to its value on both human and animal health. “Pork is the most widely-consumed protein globally. It is critical to protect and improve the health of these animals to provide nutrients for humans, especially with the growing human population and the need for increased efficiency of food production,” Niederwerder said.

The potential damage of the introduction of a disease like ASFV into a livestock population cannot be overstated and will always be at risk in our globalized economy. Niederwerder’s research at K-State aims to provide tools to prevent introduction into the U.S swine population and to provide global tools for other countries to curb the further transmission of the virus. It is preemptive research here in the heartland that maintains the delicate balance that keeps plates full and food systems stable in the U.S.