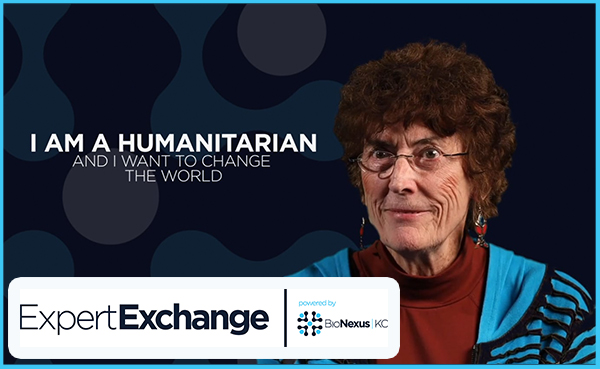 Making the world a better place requires compassion, the ability to react to unique and challenging situations, and the courage to face what others fear. University of Missouri – Kansas City professor and humanitarian, Carole McArthur MD PhD, has that perfect balance of unique characteristics. For more than two decades, she has tackled HIV research that has greatly affected the research community in Kansas City, the US and Africa. She was key in identifying a new sub-type of HIV in 2019, the first new sub-type discovered in 20 years.

McArthur was never modest with establishing her goals. At the beginning of her career, she wanted to change the world and the HIV pandemic was the biggest global challenge at the time. An early major problem with diagnosis of the HIV virus, was that its replication rate was extraordinary, which made diagnosis difficult because it was like a “moving target”. The solution was to detect, diagnose, and monitor the virus sequences over time to adapt tools to its frequent mutations.

After identifying the need for virus isolates from Africa for her research and that of US Companies, McArthur set up a lab in Cameroon, Africa. The laboratory was supported by many of the hospitals in Kansas City, as well as foundations and biotech companies seeking pathogens unavailable in the US. Supporters contributed the equipment and supplies needed to create and sustain a productive lab space. The benefit of this was two-fold: the local population in Cameroon received free health care, such as access to TB and malaria testing, and biotech companies in Kansas City obtained valuable biotechnology information essential to viral diagnostic tool development. Improved HIV testing assured the integrity of regional blood bank transfusions, for example.

McArthur’s connection with Africa has been mutually beneficial. “Africa is the heart of civilization. It’s where man evolved, and where man’s relationship with diseases developed,” McArthur said. “It has a broad range of infectious diseases and gives us access to isolates that infrequently occur in the US, but help our industries advance their tools.” One of the unique advantages of the African clinic is the large patient population providing clinical material that significantly accelerated McArthur’s research progress and that of her collaborators. “I tested over 20,000 patients a year for HIV when I first started in Cameroon in 1997. I achieved this for 5-6 years in a row. This biological material significantly contributed to understanding HIV genetics,” McArthur said. “It also contributed towards the development of a reliable blood banking network that could prevent HIV transmission via the blood supply. In the early 1980s, HIV was transmitted to patients inadvertently by contaminated US blood products.”

McArthur’s goals remain high for her future work. A remaining challenge to HIV researchers, is that of understanding HIV residual disease. Residual disease occurs when the infection conceals itself in the lymph nodes and rebounds if pharmaceutical treatment ends. A second unresolved challenge is that of vaccine development. Researchers strive to identify how to eliminate the virus entirely. She also currently has a research program in Kinshasa, Democratic Republic of the Congo, where she has a team working with two groups of mothers, – one group that passed the virus to their children and another group that did not. McArthur is studying the genetic features within those patients that determines transmission across the placenta from mother to child.

McArthur had a fascination with biology early. Growing up in New Zealand provided her with ample outdoor exposure. She has a vivid memory of dissecting eels that she caught in the Clutha river. She was

instantly fascinated by the heart beating in isolation, intrigued by blood traveling through the various vessels and wondered what the function of the swim bladder was beneath the vertebral spine.

McArthur never hesitated to pursue her passion for science and research. Early in her career, she applied for a job with the Director of the Portobello Marine Station, Dr. Elizabeth (Betty) J. Batham. “I thought I had no chance among a team of male applicants, but I applied anyway,” McArthur recalled. “I went for an interview and Dr. Batham asked me a few questions. Can you row a boat? I said “you betcha”. Can you use a .22 rifle? Yes. She next asked me what a specific chemical was, something simple like sulfuric acid. I answered correctly, and she said, you have the job. I think she really wanted to hire a girl.” So in an instant McArthur became the right hand technician to an internationally recognized marine biologist. “Betty taught me an enormous amount.” As a message to girls and women approaching a career in STEM today, McArthur’s message is simple, “Go for whatever you think you would like to do, not what other people say you should do. Push through barriers, see no obstacles, and go for it.”

The pandemic of HIV that once was an unspeakable fear is now very treatable and becoming less daunting with each new discovery. After decades of contributions to both HIV and infectious disease research and the Kansas City community, McArthur continues with her African adventure. Her dream of making life better for people pushes her forward to her next big impact on the world.