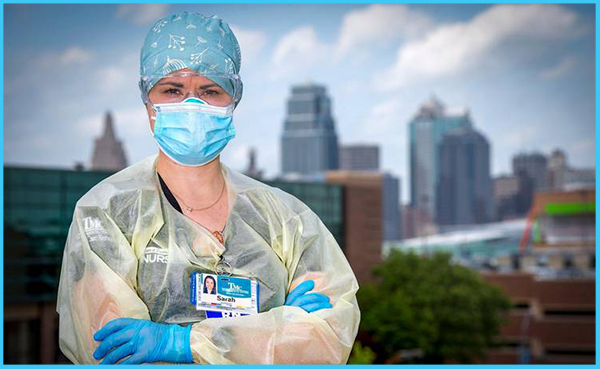 The middle-aged man lay dying of COVID-19 in the intensive care unit, only moments from his last, shallow breath. The ventilator was removed. His brain had already been hit by blood clots caused by the coronavirus during respiratory failure.

Sarah Kiehl stood at his bedside, her face and head beneath a plastic hood, her hands and entire body shrouded in protective gear.

In her six years at Truman Medical Center, three in the ICU, the 28-year-old nurse has witnessed deaths from shootings, stabbings, car accidents, end-stage cancers. In all those cases, relatives were in the room.

On this day, in a surreal moment, she held up an iPad, livestreaming a grid of the man’s loved ones. Tiny, weeping, praying little faces appeared in boxes, saying goodbye. She moved the iPad at their request, so they could see his hands and his face, unable to kiss or touch him in comfort.

“The first time I did it, it knocked me out,” Kiehl said of the video farewell. “It was something that hit me. I was like, we’re doing this now. And we’re going to have to keep doing this.”

She has, one, two, five more times since then, and as many for her nurse colleagues. Since March 20, the hospital has seen dozens of COVID-19 patients.

Kiehl has seen the tributes to health care workers on television, the nightly applause as shifts change in places like New York. People call them heroes for their sacrifice, willingly putting themselves in danger to help strangers.

She bristles at the accolade. “Very kind, very nice,” she said. “But it always makes me feel weird.”

Weird, because by one view, heroes are supposed to defeat their enemies.

The Blue Springs nurse knows firsthand that for those hardest hit by the illness, “we’ve lost the battle in a lot of ways” — at least so far. There is no effective medication. There is no vaccine. Patients who go on ventilators are often so ill that they are not coming off.

“I leave work and I do not feel heroic,” Kiehl said. “I feel exhausted.”

Heroes aren’t only defined by the battles they win, but also by their willingness to fight on principle, even in the face of one defeat after another. So it is for Kiehl.

“Because it matters. It all matters,” she said.

THE OVERLOOKED AND UNDERSERVED

For her, it especially matters that she provide the care to a population that is frequently overlooked and underserved: People of color. People in poverty. She’s sympathetic to health care workers who would choose not to be on the front lines of the COVID-19 fight, concerned about carrying the virus home and putting their loved ones at risk.

Though she is married, coming on six years in June, to Paul, a freelance designer, she is young. She’s healthy, a hiker and kayaker. The couple have no kids. For her, the idea of not playing a role during one of the greatest health calamities in 100 years is anathema.

“I can’t not finish what we started,” Kiehl said. “It’s kind of a no-brainer to me. It’s exhausting, yes. But the whole reason I got into nursing is to serve the population we serve at Truman. They deserve excellent care in the midst of this.”

When she was younger, at the start of her nursing career, people were often alarmed when she told them she preferred to work with the poor and underserved.

“Everyone’s response was so visceral: Why would you do that? The fact that people can have that response about other human beings is horrific to me. It’s unconscionable,” said Kiehl, raised in Lee’s Summit, the second of two daughters, in a home of relative privilege. “I was lucky and I’m thankful for that privilege. But I also need to use that privilege to help other people, Or what was it for? What was it all for?”

But soon she heads back, feeling personally compelled to be there.

“I do feel like I would have a feeling of inertia were I not at work,” Kiehl said. She picks up shifts on her days off. “I want to help — know that I can, know that my hands know how to do some things. When I’m not doing that, I’m feeling helpless.”

Inside Truman, the “Rocky” movie theme sounds from the public address system when a COVID-19 patient goes home. But those have been the less-ill patients in other units.

“At the very beginning of this, the genuine belief was that maybe if we get people on the ventilators early, they’ll be more likely to succeed,” Kiehl said. “Their lungs will have a chance. Now, intubation is this fraught over, hand-wringing decision. When it comes to a place where we have no other choice, doctors are just distraught about having to even do it.”

They are also now using “prone positioning. It’s a simple method, shown to be effective in avian flu and ARDS (acute respiratory distress syndrome), that involves turning patients on their stomachs to help fluids move from the back of the lungs to the front. It allows more lung tissue to be filled with oxygen.

In mid-May the hospital received its first shipment of the anti-viral drug remdesivir, given an emergency use authorization May 1 by the Food and Drug Administration. The hospital is also part of a Mayo Clinic clinical study for the use of blood plasma taken from recovered COVID-19 patients The hope is that antibodies in the plasma will attack the contagion. One of the ICU’s two surviving ventilator patients was being given the plasma.

So far, Kiehl said, all of those who have died have had preexisting conditions. She worries about that fact lulling others into a false sense of security. “I do want to be clear,” Kiehl said. “It’s not like these are wild, preexisting conditions. It’s people with run-of-the-mill hypertension, diabetes, the stuff that everyone’s grandma, father or uncle has: asthma, COPD that we see every day.”

By: The Kansas City Star