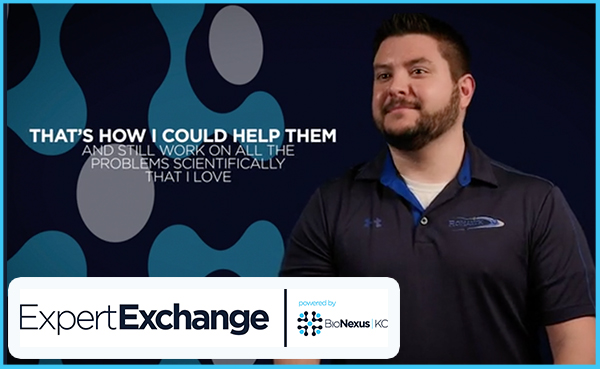 In baseball, preparing for the first pitch requires a great deal of practice and builds on a spectacular amount of behind-the-scenes effort. Being a scientist is not much different – amazing discoveries, treatments, and technologies resulting from countless hours of energy and effort. That’s where Dr. A.J. Mellott saw an opportunity to make a difference with Ronawk, LLC, a biotech startup company that’s developing an innovative technology to help researchers produce stem cells at a massive scale. This technology allows scientists to do more experiments, test new ideas, and devote their time to something that could be translated to patient impact.

For Mellott, invention was the solution to a frustrating experimental problem, ultimately resulting in a multifaceted effect with potential downstream benefits to patients. Ronawk’s creation is a Tissue Block (T-Block) that allows for large scale, 3-dimensional expansion and cultivation of stem cells requiring minimal maintenance. Without the T-Block, researchers developing stem cells spend significant amounts of time feeding the cells and then disassociating them as they grow. This is important to ensure that the cells maintain essential properties of stem cells.  In addition to being laborious and time consuming, the process ultimately limits the number of stem cells produced, creating a major pain point for scientists by hindering the ability to experiment with different strategies in their work.

Traditionally, scientists would use what is called a T300 tissue flask. If one filled an entire CO2 incubator with these T300 flasks, it would produce about 360 million cells. One T-Block has the equivalent surface area of about 30 of these flasks and is only one cubic centimeter in size. The same incubator, that holds up to 164,232 cubic centimeters, now has the potential to expand that production to billions, even trillions of cells.

Beyond the production efficiency, the secondary goal of Mellott’s T-Block technology is to be able to support stem cell transplantation treatments and offer a pre-emptive disease reserve. For stem cell transplants, a bone marrow extraction is performed prior to chemotherapy and then subsequently returned to the patient. With a T-Block system implemented, the returning number of cells could be multiplied by several orders of magnitude and potentially compound future benefits for the patient. The other opportunity Mellott sees is taking healthy stem cells from a patient, at any age, storing them, and using the T-Block technology to create a supply of cells for future needs.

Mellott is excited to bring this kind of start-up energy to the Kansas City area. “There is an amazing network of resources here, but it goes beyond the city. I’m working with individuals in Nebraska, Oklahoma, Iowa, and Missouri and we are trying to leverage each other’s resources, so that we can compete with Boston and the Bay Area. These are brilliant people and together we each have the unique technologies that when we put them together, can do something really great,” Mellott said.

Mellott remembers the first time he saw science as his calling. He was watching the movie Contact, and it was the problem solving and exploration that excited him, not the aliens. A native Kansan, he received his PhD in Bioengineering from the University of Kansas and in 2016 he founded the Repair, Reconstruction, and Regeneration (R3) Lab at KU Medical Center. The primary effort of the lab was to develop novel biomaterial scaffolds that would incorporate 3D bioprinting into wound healing research.

For Mellott and Ronawk, efficiency in the prep work means that scientists can get out of the batting cage and into the game. “I was never interested in starting a company, but in my mentorship and outreach we exposed the struggles that were in healthcare. I looked at those same struggles in my time as a scientist and engineer and I saw the pathway to help them,” Mellott recalled. This technology is the gift of time to researchers and ultimately, to the patients that will realize the benefits of the discoveries that additional time will provide.