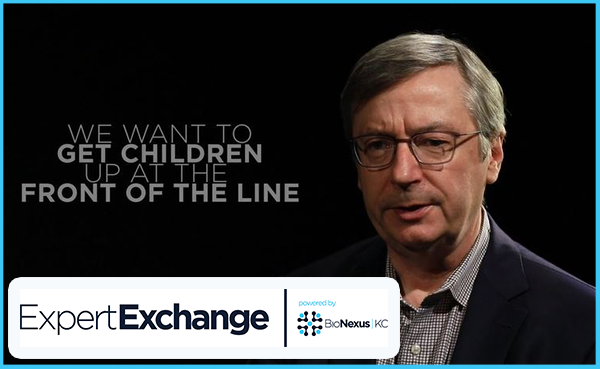 After identifying and naming his own cancer gene in 1995, Dr. Tom Curran faced a big decision about his career. He could have coasted on his previous accomplishments or taken other predictable turns, but he chose to focus on a tragically underserved medical condition, brain tumors in children.  Since making that choice, Dr. Curran has focused on developing treatments for pediatric patients and refuses to settle on using adult treatments for children.

Early on in this research path Curran, Executive Director of the Children’s Research Institute at Children’s Mercy, joked with a well-known brain tumor expert, that he had read all the literature on the subject – and it only took a week. The clinician smiled and acknowledged that it took a lot longer to write than to read. This field doesn’t have a lot of players because several factors prohibit aggressive treatment. First, pediatric brain tumors are rare and challenging to study because there are few cases. Second, since the tumors are in the brain, current treatment options of chemotherapy and radiation will cause damage. For the past 20 years, his team has been developing targeted therapies that can kill brain tumor cells without damaging the developing brain. His team strives to build the kind of institution that attracts young scientists who are also determined to help kids.

The existing assets and collaborative environment in the region made it possible for Dr. Curran to come to Kansas City and begin linking together researchers at Children’s Mercy, the KU Cancer Center and the Stower’s Institute. “If Stower’s didn’t exist, I would need to bring all the basic research into Children’s Mercy. That is a tall order to build both a translational and a basic research enterprise,” Curran said. This strong foundation allows Dr. Curran and his team to focus precisely on the science that helps kids. “I’ve been very successful in science. I’ve published papers, received grant support and accolades, but coming up with a therapy that actually gets into the clinic and helps kids, that is the biggest thrill you can imagine.”

Dr. Curran grew up in a small village in Scotland that was at the forefront of shale oil extraction. His interest in science peaked when he took a sample from the shale in his hometown to a local chemistry company. Under an infrared scan, the sample showed traces of carcinogenic toxins that contaminated the oil. This contamination led to a very high instance of cancer in his hometown.

Dr. Curran’s daughter is in middle school and he says that altering the science curriculum will steer more kids towards STEM fields. “We see the youngest kids fascinated by science and they maintain that fascination up until about middle school. At that point, the way that we teach science tends to emphasize memorization or non-practical material and we lose those kids,” he said. “It’s very hard to get them back again.”

In the approach to something like treating brain tumors in children, it takes fearlessness, inspiration, creativity, and collaboration. Dr. Curran grew up in a community that was significantly impacted by cancer. He recalls the first treatments that he helped develop specifically targeting children’s brain tumors and seeing the MRI images showing the tumor shrinking. “I knew that it worked in model systems but actually seeing it shrink was the coolest thing ever,” he said. “The science is coming closer and closer to the medicine.”