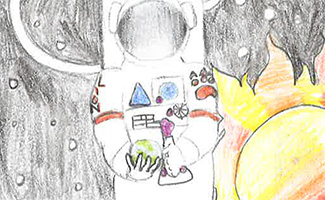 The Kansas City Area Life Sciences Institute helped fund the Student Spaceflights Experiment Program (SSEP) Mission 10 to the International Space Station (ISS) in Lansing, Kansas. The program encourages the next generation of scientists and engineers by allowing middle school students to create a science experiment that will be conducted at the ISS in the fall of 2016. Students are encouraged to collaborate with local scientific experts in designing their experiments.

About 600 Lansing Middle School students have worked in teams to create more than 60 proposed experiments. The top three proposals selected were:

These proposals were submitted to the National Center for Earth and Space Science Education for review and they selected “Possible Effects of Microgravity on Development of Dictyostelium discoideum” to be conducted on the ISS.