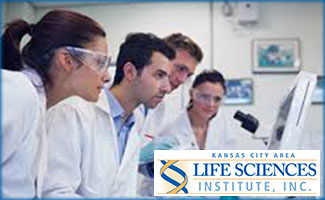 All proposals submitted to KCALSI grant programs undergo a review process similar to the National Institutes of Health. Each proposal is assigned to three external scientific peer reviewers that evaluate proposals on the basis of scientific merit, relevance to KCALSI’s research goals, and likelihood that the project would lead to external funding. Each applicant receives written reviews of their proposal regardless of funding decision.

From 2007-2014, KCALSI grant programming has managed 58 grants totaling $2,900,106 million, which enabled area researchers to successfully compete for $26,504,157 million in additional funding – representing a 9:1 return on investment. Importantly, this number should be viewed conservatively as no information is available regarding grants made to regional scientists by private foundations and patient advocacy organizations.

Neurodegenerative Disorders Caused Damaged Protein Accumulation
Dr. Kathy Newell and her team at University of Kansas Medical Center will focus on a gene producing a specific protein that targets damaged proteins for removal from nerve cells.

Zika Virus Infection Resulting In Microcephaly
Dr. Herbert Gelhaus at MRIGlobal is collaborating with researchers at the University of Missouri to examine how Zika virus spreads to provide tools to the research community and better understand how Zika virus causes microcephaly in a developing fetus.

Causes of Spinal Birth Defects within the Uterus
Dr. Jeff Gorski at the University of Missouri–Kansas City, in collaboration with Drs. Jeffrey Price and Paul Trainor at the Stowers Institute for Medical Research, will begin new research on spinal birth defects.

2016 marks the fifth consecutive year that KCALSI has managed the grants program for Blue Cross and Blue Shield of Kansas City (Blue KC). Grants were issued to support projects in autism, infant fever, heart failure, and end-of-life care. This year’s awardees include:

The Creation, Implementation, and Validation of a Smart Phone-Based Heart Failure Registry
Dr. Michael Nassif at Saint Luke’s Hospital received a grant to focus on the creation of a smartphone app serving as a tool for clinical management in heart failure patients.

Reducing Evaluation Variability in Infants with Sepsis
Dr. Russel McCulloh at Children’s Mercy will be working with the American Academy of Pediatrics (AAP) to update and deploy an app called iGuideline as part of a national practice improvement initiative.

Coaching on End-of-Life (EOL) Heart Failure Care with Caucasians and African Americans
Dr. Piamjariyakul at the University of Kansas Medical Center received funds to support a project that tests a coaching intervention for heart failure patients and their caregivers to engage in end-of-life discussions specific to home care.

This is the first year KCALSI received funds to support a new grant program for research of neuromuscular/musculoskeletal diseases. These funds were received from the Victor E. Speas Foundation, Bank of America, N.A., Trustees. This year’s awardee is noted below:

The KCALSI Collaboration Task Force developed a concept to enhance regional collaboration that was launched September 29 as Collaborate2Cure. The idea is to explore a specific scientific topic in weekly presentations over the course of several months. Two scientists present each week on the topic. The initial round of Collaborate2Cure is focused on Immunotherapy – Cancer and Beyond. To incentivize new collaborations, KCALSI will invite proposals at the conclusion of the series for a Collaborate2Cure Research Development grant of $50,000. Attendees and researchers at KCALSI stakeholder institutions are encouraged to submit proposals that include inter-institutional collaborative research focused on new innovative approaches in cancer immunotherapy. Proposals that include industry partners are strongly encouraged. Specific details of the program are listed in the Collaborate2Cure RFP.