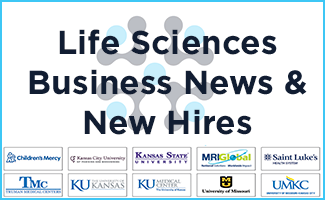 The three founders of SaRA Health launched their health tech startup in Los Angeles earlier this year and planned to grow it there. But then Kansas City grabbed their attention. More information »

Caravan Health promoted Tim Gronninger to President. That title had been held by Co-Founder Erin Fulton, who continues to serve as COO. Lynn Barr, another Co-Founder, remains CEO. More information »

Dr. John Lantos, Director of the Bioethics Center at Children’s Mercy Hospital and Professor of Pediatrics at the University of Missouri–Kansas City School of Medicine, was honored with the William G. Bartholome Award for Ethical Excellence at the recent National Conference of the American Academy of Pediatrics. More information »

The name may be new, but foundation CEO Dr. Bridget McCandless said the rebranding has been in the works for two years and reinforces the organization’s focus on the promise of a healthier tomorrow for those most in need. More information »

Pipeline CEO Will Step Down, Inspired to Seek Her Next Adventure

For 12 years, Joni Cobb has poured her passion and energy into Pipeline Inc., helping the entrepreneurial fellowship program morph into a regional force. But now she’s looking for a new chapter and announced that she will step down as CEO at the end of 2019. More information »

Steven Soper, PhD, member of The University of Kansas Cancer Center, was elected to the American Institute for Medical and Biomedical Engineering (AIMBE) College of Fellows. More information »

Assistant Vice Provost Elected to National Board of STEM Organization

The Society for Advancement of Chicanos/Hispanics & Native Americans in Science announced the election of Roberta Pokphanh, University of Kansas Assistant Vice Provost for International Programs, to its national Board of Directors. More information »

Nicole Ford, PhD, has joined the Kansas City University College of Biosciences faculty as an assistant professor in Biomedical Sciences. She serves as course director and teaches in the Molecular & Cell Biology and Biochemistry courses.

Benjamin Johnston M.D. joins the team at Truman Medical Centers as a Hepatobiliary and Pancreatic Surgeon.