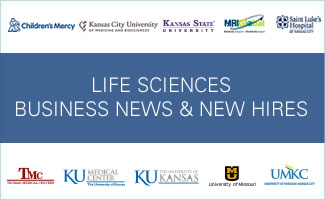 Douglas C. Bittel, PhD, has joined Kansas City University of Medicine and Biosciences as associate professor in the College of Biosciences. He currently teaches human genetics, as well as having responsibilities for developing specialized training in the field of bioinformatics. Providing students with this career-applicable knowledge will help meet growing workforce demand in the Kansas City region — and across the country — as this technical skill set becomes increasingly critical to the delivery of health care. More information »

Charles Taber, the vice provost for graduate and professional education and dean of the Graduate School at Stony Brook University, New York, has been named the new provost and executive vice president of Kansas State University. He will assume his new duties on Aug. 15. More information »

Alysia Starkey, associate dean of academics at Kansas State University Polytechnic Campus, will serve as interim CEO and dean of the campus while a national search for a new leader is conducted. More information »

Michael Chapman has been named chair of the Department of Biochemistry at the University of Missouri, effective July 16, 2018. Biochemistry is a joint academic unit within the School of Medicine and the College of Agriculture, Food and Natural Resources (CAFNR) at University of Missouri. The department is noted for interdisciplinary research and effective instruction. More information »

University of Missouri Chancellor Alexander N. Cartwright announced that Latha Ramchand, dean of the C.T. Bauer College of Business at the University of Houston, has been appointed as provost and executive vice chancellor for academic affairs. Her appointment is effective August 15, 2018. More information »

University of Missouri Interim Provost Jim Spain announced today that Sarah Thompson, associate vice chancellor of health professions and professor in the College of Nursing at the University of Colorado Denver, has been named dean of the MU Sinclair School of Nursing. Thompson’s appointment will begin Aug. 1. More information »

Researchers with The University of Kansas Cancer Center have received a five-year National Institutes of Health R01 grant to study how immune-enhancing nutrition affects the outcome of a radical cystectomy. More information »

The University of Kansas Cancer Center has partnered with 69 other National Cancer Institute (NCI)-designated cancer centers to issue a Call to Action urging for increased HPV vaccination and screening to eliminate HPV-related cancers, starting with cervical cancer. More information »

The Department of Veterans Affairs (VA) announced an agreement with Cerner Government Services, Inc., a wholly owned subsidiary of Cerner Corporation for the VA to use off-the-shelf Cerner solutions to provide veterans, transitioning service members and their care providers access to their medical history through a single electronic health record (EHR) system. More information »

Pharmaceutical Services Company Will Bring 225 Jobs to New KC Center
Trailcard Inc., a fast-growing company based in North Carolina will open a contact center in Kansas City that will employ 225 people. More information »

Mid-America Manufacturing Technology Center (MAMTC) is pleased to announce that Tiffany Stovall has been promoted to CEO. More information »

Netsmart Lands on Forbes Top 500 List and Ingram’s Best Companies to Work for in 2018
Five years ago, not long after relocating Netsmart from its previous home in New York, Mike Valentine had assembled a staff of 185 at his new headquarters in Overland Park. That figure has more than tripled since then, as the company has become the nation’s largest provider of electronic medical records in the behavioral health sector and is also a great place to work. More information »