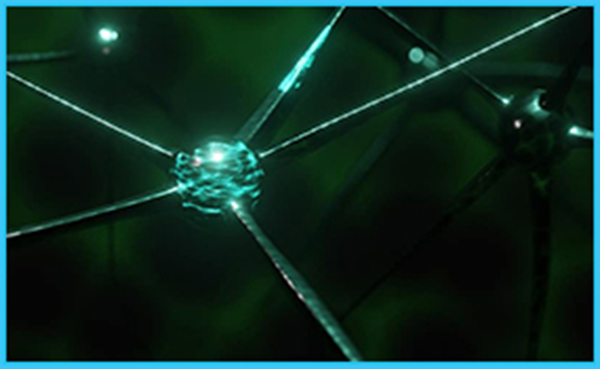 With her beautiful blue eyes, feathery blonde hair and a smile that just won’t quit, Emerson Schrivener looks like a healthy 4-year-old.

But looks can be deceiving. Her mother, Destiny Moser, noticed between 3 and 4 weeks of age that Emerson’s stomach was a little bit bigger than it should have been.

Emerson’s pediatrician referred her to Children’s Mercy Kansas City, where a liver biopsy showed she was in extreme liver failure.

Unsure why Emerson’s liver was failing, her doctors ordered genetic testing which revealed she is one of only 500 children in the world diagnosed with Neimann Pick Disease Type C, a rare progressive genetic disease that is fatal. 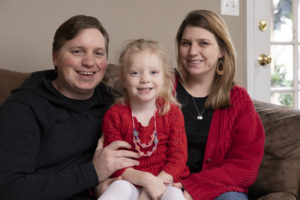 The news was devastating for her family. Eventually, Emerson will lose all neurological function, including the ability to talk, swallow and walk. She will even develop dementia that could resemble Alzheimer’s disease.

But the family has hope—hope that treatment may slow the disease down—and hope that research may one day lead to a better treatment, or even a cure.

Jean-Baptiste Le Pichon, MD, PhD, FAAP, Pediatric Neurologist, leads Emerson’s care team at Children’s Mercy. He championed a treatment for her under a compassionate use trial, an exemption doctors can apply for when there are no other good treatment options for a patient.

The treatment, 2-hydroxypropyl-β-cyclodextrin, also known as VTS270 or cyclodextrin, was in clinical trial when Emerson began showing symptoms at 2 years old. At the time, she was too young to start the trial, approved for children 4 and up.

That’s when Dr. Le Pichon, in agreement with the principal investigator on the study, Dr. Elizabeth Berry-Kravis, Rush University, joined the expansion program she created to start treatment for Emerson.

Emerson receives the medication every two weeks by injection in the space surrounding the spinal cord, called an intrathecal injection. It isn’t stopping the disease, but it’s slowing it down.

“Emmy has been in the trial for two years now and her symptoms have completely stabilized,” Dr. Le Pichon said. Though he is hopeful a gene therapy will be available soon to treat the disease, he said she is doing great. “Emerson is adorable and charms everyone who meets her.”

“Emerson’s team at Children’s Mercy is an absolute Godsend that moves mountains for her,” Nick said.

“They go above and beyond to give Emerson the best quality of life,” Destiny added.

The treatment Emerson is receiving today gives her parents hope for tomorrow. They know it won’t cure the disease, but they believe research could, and that research starts at Children’s Mercy.

Roughly 50,000 families in the metro area have a child who has a rare disease, like Emerson. According to Tomi Pastinen, MD, PhD, Director of the Children’s Mercy Genome Center, only 20% of families with children living with a rare disease know what’s causing the condition, and many won’t live to celebrate their 5th birthdays.

Unfortunately, most institutions aren’t studying rare diseases in children; and only 5% of rare diseases have an FDA-approved treatment.

But Children’s Mercy is working to change that. Emerson is enrolled in Genomic Answers for Kids, a flagship initiative of the Children’s Mercy Research Institute, a nine-story, state-of-the-art research facility dedicated to creating an integrated clinical and research environment. The facility is scheduled to open later this year.

Meanwhile, Genomic Answers for Kids is collecting and storing genomic information and biological samples from children who may have a genetic condition and their biological family members.

The project’s goal is to work with 30,000 children. This will be a rich resource for researchers studying genetic conditions, and could lead to answers and new treatments for children, like Emerson.

“Our greatest hope is that the science is quicker than the disease progression,” Destiny said. “One of these days, I hope the family that gets this diagnosis isn’t told it’s fatal. It’s research that could save Emerson’s life, and other children who also have Neimann Pick Type C. Without it, she won’t have a chance to grow up.”

“There’s a lot going on between trials and gene therapy that looks really promising,” Nick adds, “but there is no hope without research.”

The upcoming addition to the hospital may help this family, and others, find answers.

“There is definitely hope,” Dr. Pastinen said. “I think we have to think of rare diseases collectively. Most of them are unsolved. The grand prize for us is to give answers to those over two-thirds of families who don’t have answers today.”

To learn more about Dr. Pastinen’s work ->The Connection Blog